Title of the articles
1 . A review about the book “Return to Islam” written by Mansoor Hashemi Khorasani2 . The crisis of division in the world of Islam; causes and solutions; a narration from the book Return to Islam3 . The ominous spell of affiliation4 . Who does not read the book Return to Islam or reads it, but does not benefit from it?5 . Mahdi, the axis of unity of Muslims6 . The domination of hypocrites over the world of Islam7 . An explanation about the determination of the first and last day of the holy month of Ramadan8 . The insult of the West to the messenger of God peace and blessings of God be upon him and his household; Factors and solutions
Title of the remarks
1 . Inverted era
Article

Number: 8
Title: The insult of the West to the messenger of God peace and blessings of God be upon him and his household; Factors and solutions
Author: Dr. Zakir Maroof 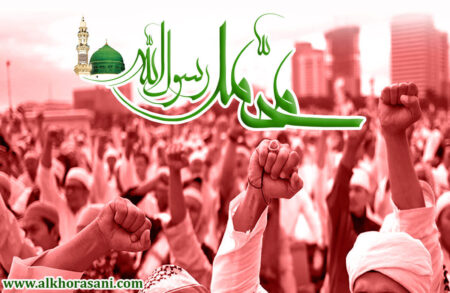 In these dark days, when indolence and drowsiness have overshadowed the Muslims of the world, we are witnessing a new wave of insults to the messenger of God peace and blessings of God be upon him and his household, and widespread and openly support for those who insult the Prophet of Mercy in Western countries, especially France that are guided and encouraged by the official authorities of this country.

This shameless insolence reveals another manifestation of the depraved and degenerate culture of Western infidels who, despite their colorful claims, have not yet learned the trivial facts and principles of humanity, such as respecting the opinions of others and they consider hurting the feelings of more than one and a half billion people in the world and insulting their sanctities as the right of everyone and an example of freedom of expression! This is the real face of the West behind the mask of democracy and human rights that His excellency Allamah Mansoor Hashemi Khorasani may God protect him has said about it:

“it is clear that most of the unbelievers especially in the Western lands, in cultural aspect are in a condition close to savagery, due to their separation from civilization centers and they have not grown sufficiently in humane aspect and therefore they require Muslims’ education... the culture which is governing the atheistic world, especially in Europe and North America, is a complete example of the modern barbarism, formed based on brutal unrestrained brutish desires and is in contradiction with inherent and humane laws and is comparable with savage culture of some primitive tribes.”[1]

Undoubtedly, this evil and satanic act is strongly condemned and has triggered anger from God, His prophets, saints, angels, and all Muslims, free and conscientious human beings in the world, and silence and indifference towards it is not permissible at all. Therefore, the Muslims of the world, at least at such a time, must put aside their differences and stand united and coordinated against the attack of the infidels on the principle of Islam and its great prophet, and take appropriate and effective reactions with spontaneous and well-thought acts and meanwhile, they force their lazy and low dignity rulers to react.

In this regard, several practical solutions can be suggested:

1. First of all, the Muslims of France, who are not few in number, are expected to gather in condemnation of insulting the Prophet of Islam and hold large scale demonstrations, expressing their hatred and anger at this hideous and dirty act to the officials of this country and the insulters and their supporters so that they do not dare to do more and continue their evil deeds.

2. It is necessary for other Muslims in different countries, both Islamic and non-Islamic, to form coordinated and large-scale demonstrations and express their anger and disgust with this evil deed so that all the world realizes that Muslims are not inert, but they are sensitive very much towards their sanctities and do not tolerate insulting their prophet in any way.

3. It is necessary that in cyberspace, simultaneously with real space, a campaign is launched by Muslims, especially committed and active youth in this field, to condemn this evil act, so that the attention of people and governments and cultural institutions is attracted by highlighting supportive phrases and trending hashtags around the world and let everyone understand the consequences of these heinous acts.

4. The products of France and any other country in which Muslim sanctities are freely insulted need to be banned by all Muslims in the world; Whether formally and governmentally or by the people themselves and spontaneously; Because financial loss is more important and deterrent for these materialistic and worldly infidels than anything else.

5. It is necessary for Muslim governments to recall their ambassadors from France and any other country in which Muslim sanctities are freely insulted, and to cut ties until an official apology from the authorities of that country and a guarantee that this evil deed will not be repeated, is provided; Not to normalize their relations with Israel at the rise of the insults to the sanctities of the Muslims, in order to show their hypocrisy in this meaningful and treacherous act and to slander Islam and the Muslims!

It is hoped that with these appropriate and prudent measures, the fire of insult and sedition in Western countries will be extinguished and it does not get to a point that an angry Muslim finds an insulter in the street and cut off his head, and by doing so, he gives an excuse to the infidels to increase their insults and make the evil insulters a national hero!

Of course, there is no doubt that all these measures are temporary, and what will put an end to the parade of infidels forever is the realization of God’s sovereignty over the earth by his caliph, Imam Mahdi peace be upon him, which is feasible with the will and efforts of Muslims to have sufficient support for him and that is considered preparing grounds for his advent, which is being carried out under the leadership of His excellency Allamah Mansoor Hashemi Khorasani may God protect him, in the framework of the “Return to Islam” movement, and it is hoped that with more cooperation and sympathy of the free and zealous Muslims, it will accelerate.

↑[1] . Return to Islam, p76 & 77
Other articles and remarks written by this author:
1 . Article “An explanation about the determination of the first and last day of the holy month of Ramadan”
Previous article
Share
Share this content with your friends.
Email
Telegram
Facebook
Twitter
You can also read this content in the following languages:
فارسی العربية Точикӣ
If you are familiar with another language, you can translate this content to that language. [Translation form ]
×
Writing article or remark
The use and application of contents of the website are allowed only with explicit mention of the source.
×
Login