Title of the articles
1 . A review of the book Return to Islam by Mansoor Hashemi Khorasani2 . The crisis of division in the world of Islam; causes and solutions; a narration from the book Return to Islam3 . The ominous spell of affiliation4 . Who does not read the book Return to Islam or reads it, but does not benefit from it?5 . Mahdi, the axis of unity of Muslims6 . The domination of hypocrites over the world of Islam7 . An explanation about the determination of the first and last day of the holy month of Ramadan8 . The insult of the West to the messenger of God peace and blessings of God be upon him and his household; Factors and solutions
Title of the remarks
1 . Inverted era
Article 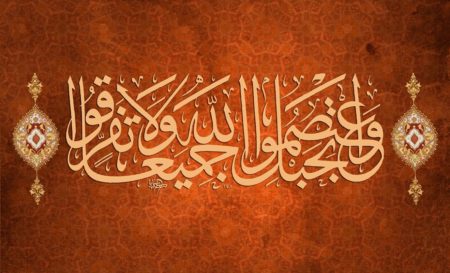 In the current situation of the Islamic world, it seems that Muslims of the world, first of all, need to abandon and forget their old disagreements and conflicts that are buried deep in the past centuries and eras; because on the one hand, reviving the old disagreements and bringing them up repeatedly does not resolve any problem of Muslims, rather it is adding insult to injury, and on the other hand, according to the explicit words of God in the Holy Quran, quarrel and conflict between them lead to the weakness and annihilation of their strength, and make the enemy dominate them; as God Almighty has emphatically commanded all Muslims to hold firmly and adhere to His rope and considered it the cause of their unity and said: ﴿وَاعْتَصِمُوا بِحَبْلِ اللَّهِ جَمِيعًا وَلَا تَفَرَّقُوا﴾[1]. Therefore, in the critical circumstances Muslims are in, their only correct and wise approach is to make well-wishing and sincere efforts to find the best solution and form a single foundation and a real common axis in order to end the disagreements and enmity among Muslims and initiate the process of integration and a firm and stable unity. It is clear that if Muslims have a good intention and seriousness in taking this approach, the mentioned search will not be very difficult and futile; because on the one hand, guidance is from God and He does not leave His sincere and pious servants astray, and on the other hand, in case there is no neglect from Muslims themselves, their public negligence that has covered their consciousness like a curtain will end by taking such a blessed approach, and then they will see well in their truth-seeking natures that all of them feel a common understanding of the undesirable existing things and the desirable must-be things. This is when they will remember all of their Islamic and innate desires and goals, and, by the guidance of God, once again they will come close to each other and join together and form the front of the truth by forming a single rank.

But there is no doubt that at the top of all the common desires and goals of the Islamic world, there is the establishment of global justice and the elimination of oppression and corruption on the earth through the formation of an independent and truthful Islamic government; a government that Islam has promised to Muslims since the early days, and undoubtedly, any other legitimate and correct desire will come true only in this way, and all Muslims of the world have such a desire, whether they know it or not.

Meanwhile, what led many Muslims astray and caused them to deviate from the original path of Islam is this ominous and baseless illusion that they do not need the guidance of God to achieve this long-held and beautiful desire, and each group of them can follow whatever path they think is right and choose anyone they like to lead them toward this great goal! But we can clearly see the evil results of such an ominous illusion and naive imagination and the calamities it has brought upon Muslims of the world! Today, every group of Muslims have made someone dominant over themselves and pledged allegiance to a ruler they like. A group of them allies themselves with unbelievers, and made Muslim rulers who are in fact traitorous and malevolent hypocrites rule over them, and another group of them, with a strange willfulness and recklessness, pledge allegiance to their self-proclaimed rulers and caliphs and support them to have more power and authority. Therefore, ignorance, oppression, enmity, war and poverty have prevailed over them, and destruction and collapse have overshadowed them. This is because Muslims ignored God and did not take His will and desire about this matter into account and left behind the way He set for them to achieve this great goal. Muslims forgot that the permission of God and His command are the origin and foundation of creation and the cornerstone of the formation of the world, and all matters, equations and calculations take place only with His will and desire, and without them not even a pebble will move on the earth. Muslims forgot that God has determined a way and a method for fulfilling His promises, and has made it necessary to be commitment to this way and method in order to fulfill them. Muslims of the world neglected this great fact that God Almighty has considered exemplary and exemplary exclusively for Himself, and has forbidden them from associating partners with Him in them, and has considered associating partners with Him in them as an example of polytheism toward God. Indeed, how can they reach such a sacred goal by associating partners with Him and disobeying His commands?! Undoubtedly, God the Exalted is the true Ruler and the main Owner of this world, and the rule over it belongs to Him alone. Therefore, the realization of global justice is possible only through the way He has wants, and the ruler He has chosen for people is the only one who can establish justice, no one else. This is a fact that has been completely neglected and forgotten, despite its clarity and rightness, and of course this neglect is very strange; because all Muslims agree that the one who rises for the truth and establishes justice on the earth, and the only one whom God has announced his movement and uprising for the truth and justice and his final victory, according to mutawatir narrations, is Mahdi from the household of Muhammad; “the one who will fill the earth with justice and equity, as it has been filled with oppression and cruelty”, and there is no such agreement about anyone else. This means that he is the only legitimate ruler who is approved by God at this time, and at present the only one to whom pledging allegiance is permitted and even obligatory for Muslims of the world is Mahdi, and any allegiance to anyone other than him is disobedience to God’s command and thus following Satan, and, according to the statement of the Quran, it is considered as resorting to arbitration of Taghut, and this indicates the importance and centrality of pledging allegiance to Mahdi in Islamic teachings. This is because pledging allegiance to Mahdi is an alternative to pledging allegiance to oppressors and Taghuts of the world, and therefore, it will be the cause for the weakening of their power and the fall of their sovereignty, and on the other hand, it will guarantee the unity of Muslims of the world and their gathering under one flag; because it seems that the disagreements and divisions among the Ummah stem from political factors and numerous and divided governments, and the division among Muslims is the effect of them following various rulers and political powers, and it is natural that each sect, group and nation of Muslims follow the leader of their own, and all of the leaders of the Islamic world invite toward themselves too, and have forgotten Mahdi; because they either ignore him basically and are unable to mention his name, or they propagate that the advent of Mahdi is very far away and it is not known when it will happen. This is how the leaders the Islamic world act against Mahdi, whether they know it or not, and prevent Muslim’s public opinion from reflecting on him. In such circumstances, if we imagine that the call of inviting toward Mahdi and joining him and separating from others reaches to all Muslims of the world and all of them leave the rulers whom they have chosen without God’s permission, and rush to Mahdi, then what will happen? What changes will actually happen in the region and in the world with the launch of the awakening movement for support and obedience to Mahdi and the rise of the slogan of Muslims’ return to Mahdi?

Apparently, the first blessed result of such an awakening movement is the unity of Muslims in one rank and under one flag, as well as their cooperation and agreement through pledging allegiance to the Caliph of God, and this is the first step toward the realization of our great Islamic goal, meaning the realization of the sovereignty of Mahdi, peace be upon him; because undoubtedly, the true unity and deep solidarity among the ranks of Muslims are considered as preludes to the global revolution of Mahdi. We believe that such a blessed Islamic movement that has aimed for the unity of all Muslims under the flag of Mahdi has already begun and chanted the call of “Return to Islam”. This movement is led by the vigilant and courageous scholar, His Excellency Allamah Mansoor Hashemi Khorasani, who with his extraordinary and exemplary courage, has set the word «البيعة للّه»; “the allegiance is for God” as the slogan of his movement and believes that the only example of pledging allegiance to God in our time is pledging allegiance to the Caliph of God, Mahdi from the household of Muhammad, and any other allegiance at this time is considered as an allegiance to Taghut. Therefore, “the allegiance is for God” means the government and authority exclusively belong to the one whom God has chosen as His Caliph, and he is no one other than Mahdi. This flag-bearer of the pure and complete Islam, by presenting such a pure and authentic understanding, believes that Mahdi is the iron pillar of the tent of Islam, and the tent of Islam will not be erected until this iron pillar is established on the earth. Therefore, the duty of each and every one of Muslims of the world is to support Mahdi completely and sincerely, and help, protect and obey him. This is why we can call the movement of this great scholar the “Return to Islam” movement or the return to Mahdi movement; because he is the strong pillar and the promised establisher of Islam, and returning to him is in fact returning to the real Islam.

We hope that the awakening message of this active scholar and free reformist will be accepted by Muslims all over the world, may the demand for Mahdi becomes the united call of the nation of Islam and shake the pillars of the palaces of tyrants and Taghuts of the world.

↑[1] . Al Imran/ 103
Previous article Next article
Share
Share this content with your friends.
Email
Telegram
Facebook
Twitter
You can also read this content in the following languages:
فارسی العربية Точикӣ
If you are familiar with another language, you can translate this content to that language. [Translation form ]
×
Writing an article or remark
The use and application of contents of the website are allowed only with explicit mention of the source.
×
×