Title of the articles
1 . A review of the book Return to Islam by Mansoor Hashemi Khorasani2 . The crisis of division in the world of Islam; causes and solutions; a narration from the book Return to Islam3 . The ominous spell of affiliation4 . Who does not read the book Return to Islam or reads it, but does not benefit from it?5 . Mahdi, the axis of unity of Muslims6 . The domination of hypocrites over the world of Islam7 . An explanation about the determination of the first and last day of the holy month of Ramadan8 . The insult of the West to the messenger of God peace and blessings of God be upon him and his household; Factors and solutions
Title of the remarks
1 . Inverted era
Article

Number: 6
Title: The domination of hypocrites over the world of Islam
Author: Mojtaba Mazroei 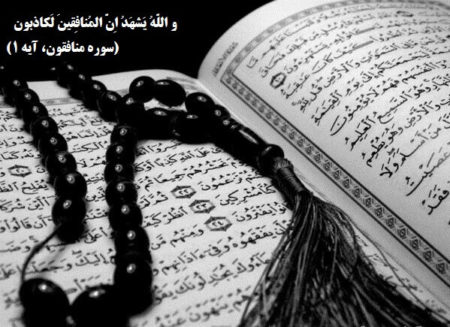 “And of the people is he whose speech amazes you in worldly life, and he calls God to witness as to what is in his heart, yet he is the fiercest of enemies”.

His Excellency Allamah Mansoor Hashemi Khorasani, in some parts of his eternal work “Return to Islam”, introduces and discloses the nature of the enemies of Islam and, with a deep and realistic view, considers the most dangerous of them to be in the camp of Muslims themselves, namely their hypocritical traitorous rulers; because it is the rulers who make the infiltration of unbelievers among the Muslims possible and take positions and act in accordance with their interests and weaken and destroy the Islamic and reformist movements in the region. This honest scholar, in this part of his speech about the enemies of Islam points to the Muslim rulers and says:

“...Furthermore, a group of Islam’s enemies, are hypocrites who are regarded as Muslims, while they do not believe in what God has revealed to His prophet, and cooperate with unbelievers for the purpose of destroying Islam and dominating atheism over the world and this is while Muslims do not know them and are not aware of their infidelity; as God has informed about their infidelity and has said: ﴿وَلَوْ كَانُوا يُؤْمِنُونَ بِاللَّهِ وَالنَّبِيِّ وَمَا أُنْزِلَ إِلَيْهِ مَا اتَّخَذُوهُمْ أَوْلِيَاءَ وَلَكِنَّ كَثِيرًا مِنْهُمْ فَاسِقُونَ﴾;[2] 'If they believed in God and the Prophet and the revelation to him, they would not make friendship with them, but most of them are sinners'! They are in fact, a group of unbelievers that are considered as Muslim rulers and are supported by unbelievers, for governing over the Muslims, in order to supply the interests of unbelievers among Muslims!...”[3]

With a brief look at the history of Islam and its bitter and unfortunate experiences, we realize that the painful truth that his honor Allamah refers to is not only unique to our time, rather the enemies of Islam at different junctures in history have been busy fighting Islam in two fronts and with two faces: one in the front of unbelievers and with the face of outright enemies of the religion of God and the other one in the front of Muslims and with a deceitful and Muslim-like mask! The enmity and positions of the enemies in the front of unbelievers has always been clear and they have always sought to undermine the power of Muslims and destroy Islam by repetitive methods and specific and expired scenarios all throughout the history, but because of the various gaps and impossibility of breaking Muslim ranks, they have always failed to achieve what they want, unless when they have succeeded to find a way to penetrate the Muslim front and employ a fifth pillar among them to weaken and destroy the united Muslim ranks; a factor which both safeguards their interests among Muslims and is a secure way to know their weak points, until finally, in an exceptional opportunity and with a hidden plot, they put the dagger of the unbelievers in the back of the body of Islam, and to inflict a hit without any hindrance which the unbelievers were never able to do; like a weak and pathetic enemy who does not have the ability to face his opponent in the battlefield, but in order to defeat him, he transfers a fatal virus into his body with a dirty trick, until he practically breaks down and makes him defenseless and then shows up over his head with no fear, and murders him.

Yes! The most venomous and dangerous enemies of Islam have always been in their own fronts; those who have worn the hypocritical mask of Islam and have been hidden behind the shield of religion, whereas they do not really believe in it and do not care about it. The truth is that the conspiracies of the cunning hypocrites and their surprising betrayals have already inflicted severe and irreparable blows on the body of the Islamic Ummah. The defeat of many awakening and revolutionary movements was made possible by the help of these traitors, and isolation and alienation of true Muslim warriors is resulted from this group’s cruelty. Many Muslim rectors and warrior leaders have fallen because of the heinous deception of this community, and this is why the realization of justice on earth has consistently been delayed and victory has been departed from this Ummah.

It is a matter of concern and regret that the sedition of these hypocrites has now become very complex and has taken on new dimensions. The elements of hypocrisy have come to power in Muslim countries and have taken over the rule over Muslims; the rulers who seem to be Muslims but their subjection and submission to unbelievers or their opposition and hostility against Islamic streams indicates their disbelief in their heart. A group of them spread the deviant Umayyad and Abbasid ideas over the majority of Islamic countries by Sunni slogans, and by spreading extremism and political and arms support to terrorist groups, they target innocent Muslims’ lives and properties and honor, and a group of them spread superstition and religious invented heresies in Islamic countries by Shia slogans, and they cause insult against Islam and conflicts among Muslims, and it is interesting that both of them are unanimous in their opposition to the purest call of the time for realization of pure and complete Islam in the world, and in order to preserve their power and prevent the Caliph of God on earth from coming to power, they do every wicked and evil work! As for example, their mercenary and self-sold elements, who do not believe in any god other than their masters, are plotting daily to hit the purified movement “Return to Islam” and block the way for its free and great leader Mansoor Hashemi Khorasani and for this purpose, they do every lie, slander, cruelty and evil act. How many educated and committed youth who are in their prisons and suffer for accepting the right invitation toward pure and complete Islam, and how many honorable and respected men and women who become infamous and dishonored for the crime of preferring Mahdi over their gods, and they get blamed and insulted!

Undoubtedly, the danger of hypocrisy and threat of the hypocrites is felt more than ever today; because the hypocritical powers of the region are becoming more brazen day by day and are making their hostility against Islam clearer. It is a huge crisis and a great sedition that is increasingly spreading, and there is no doubt that Muslims must be vigilant in order to not fall into their deadly trap.

Of course, there is no doubt that ending this evil chaos will be accomplished by the Caliph of God on earth; because no one except for him has the ability to overcome these seditious wicked people with their big bellies and rough necks, and he is the Mahdi from the household of Mohammad who, by the definite promise of God and His Messenger, will fill the world with justice and fairness as it is filled with oppression and cruelty, but the reality is that to fulfill the sovereignty of this noble man and his confrontation against evil hypocrites, one cannot sit and do nothing and only pray and repent for his Excellency’s advent, but it is necessary to form a community of sincere and warrior Muslims for a comprehensive support and to help his Excellency and declare readiness to protect and assist him and break the vicious allegiance to other rulers and pledge allegiance to the true Caliph of God on earth; because without forming such community, the advent of Mahdi would not be possible and there would be no guarantee for survival and victory for him and this is the supreme goal that his honor Mansoor Hashemi Khorasani is pursuing with his Islamic and public movement and tries to achieve it and therefore, his blessed movement is the best chance for gathering and forming a community of the youth who love Mahdi and the true waiters for his advent in order to announce loyalty and allegiance to his Excellency; the movement which with the slogan of “Allegiance to God”[4] considers any allegiance except to the caliph of God on earth equal to allegiance to Taughut and with the belief in the possibility of realizing Mahdi’s sovereignty on the condition that the aforementioned grounds are provided, is preparing the grounds for the sovereignty of his Excellency objectively and practically. Therefore, it is imperative that all those who are honest in their claim to help, love, and wait for the advent of household of Mohammad, come forward as soon as possible and gather around this flag of guidance for getting close and practical realization of Mahdi’s advent and shout loud the informing and awakening call of “Return to Islam”, even though the blind-hearted and evil hypocrites do not like it and burst with jealousy and anger!

↑[1] . Al-Baqarah/ 204
↑[2] . Al-Ma'idah/ 81.
↑[3] . Return to Islam, p. 48.
↑[4] . البیعة لله
Previous article Next article
Share
Share this content with your friends.
Email
Telegram
Facebook
Twitter
You can also read this content in the following languages:
فارسی العربية Точикӣ
If you are familiar with another language, you can translate this content to that language. [Translation form ]
×
Writing an article or remark
The use and application of contents of the website are allowed only with explicit mention of the source.
×
×