Number: 7
Title: An explanation about the determination of the first and last day of the holy month of Ramadan
Author: Dr. Zakir Maroof 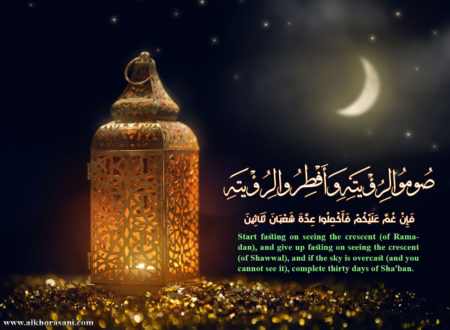 Every year when the holy month of Ramadan, the month of worship and self-improvement is about to begin, Muslims begin to strive to know the first day of it; just as when the month of Shawwal is about to begin, the question of what day is Eid al-Fitr arises among them. Undoubtedly this case is very good if it is due to their desire to start a new worship or complete it with the aim of approaching God, and it indicates that the faith in their hearts is alive in spite of all their faults and shortcomings, and it reminds of the fact that they, despite all their intellectual and religious differences, are a single nation and have many common beliefs and laws. Although the dispute between them over the first and last day of the holy month of Ramadan -which has become a routine every year- draws attention like a dark spot on the cloak of their unity, but complaining about it alone is not useful and does not help. What is needed to be done is to identify the cause of it and then come up with a solution and take appropriate action to resolve it.

The cause of the dispute

Undoubtedly, the reason why Muslims disagree about the first and last day of the holy month of Ramadan is that on one hand, most of them are still stuck with imitating their scholars or rulers, and on the other hand, their scholars have conflicting jurisprudential views and their rulers have colorful political considerations!

The solution to their dispute is that their scholars from different Islamic sects to form a joint committee and, with full independence from their rulers, to issue a unique and documented vote after consulting and reviewing the opinions of the experts and reports of the observers, so that all Muslims around the world can act accordingly.

Is this really a difficult task?! Or is it more expensive than dozens of large organizations with an Islamic suffix and huge budgets which have been established and it is not clear what they are doing and what benefit they have for the Muslims of the world?!

Certainly not, but unfortunately there is no will to do this easy and inexpensive work; because many influential scholars in the world of Islam still think that it is necessary to see the crescent in their own country, and it is not enough if Muslims in another country see it, or they think that seeing the crescent with aided eye is not enough!

Undoubtedly, this is a scholarly error which is the main cause for the disagreement about the beginning and the end of the holy month of Ramadan, and the way to get rid of it is that either this group of scholars, correct their scholarly error with courage and humbleness, or Muslims stop imitating them so that at least their influence ends and hence their influence will not be able to prevent the necessary actions such as the formation of a joint committee in the world of Islam to determine the first and last day of the holy month of Ramadan; as Allamah Mansoor Hashemi Khorasani may God protect him has spoken a lot about both ways and he has provided the necessary guidance; because on one hand, he has sympathetically explained the scholarly error of this group of scholars and he has emphasized the adequacy of seeing the crescent once -even with the aimed eye- for all Muslims in the world, and on the other hand, he has compassionately called all Muslims in the world to refrain from imitation and doing research instead, in order to pave the way for them to achieve a blessed unity.[1]

Although, there is another major obstacle in between, namely the policies and expediency of Muslim rulers, who, with a short-sighted attitude, have drawn their competition into the field of religious and worship affairs and they have found their interests in political, economic and cultural independence from other Islamic countries and therefore, they consider any attempt to coordinate with Muslims in other countries a connection with “foreigners” (!) and a threat to their security and survival!

Undoubtedly, this is another consequence of the sovereignty of the oppressors over Islamic countries, and the only way to get rid of it is to take the sovereignty from them and bring it to its true owner, Imam Mahdi peace be upon him, which will be done whether with their consent and cooperation or with their hatred and resistance, however, either way it will be carried out and there is no escape from it; as Allamah Mansoor Hashemi Khorasani may God protect him has spoken about this in detail and he has provided the necessary guidance; because on one hand, he has encouraged the Muslim rulers to give up power and take effective and obvious steps to pave the way for the advent of Imam Mahdi peace be upon him, and on the other hand, he has invited the Muslim nations to put pressure on their rulers and, if necessary, to abandon them in favor of Imam Mahdi peace be upon him, so that the way is paved in every way for them to achieve unity and the realization of the Islamic ideal.[2]

What to do today?

These are mid-term or long-term ways that should be followed by those who prepare the grounds for the advent of Imam Mahdi peace be upon him under the leadership of Allamah Mansoor Hashemi Khorasani, but the short-term way which determines the responsibly of Muslims today in regards to the holy month of Ramadan, is ignoring the announcements of the rulers and to abandon imitation of the scholars who consider it necessary to see the crescent in their country or they believe that seeing the crescent with the aided eye is not enough; because imitating them is the cause of dispute among Muslims, rather Muslims -even if they are imitators in religious matters- should not imitate in determining the first or last day of the lunar month; because the determination of the first or last day of the lunar month is not the inference of a religious law that requires special preconditions and competence of the scholars, but is the acquisition of information from an objective and external subject which is achieved by seeing the crescent in one’s own eyes or knowing that others have seen it, and it is even possible for non-Muslim population; as even the Jahiliyyah Arabs used to do so, whereas they neither had access to today’s observation facilities nor would know about seeing the crescent in far lands!

Therefore, Muslim brothers and sisters, if they are really worried about being aware of the first and last day of the holy month of Ramadan, then they should put aside laziness and instead of looking at the mouths of scholars with wrong jurisprudential opinions and rulers with unknown political motives, start investigating themselves; in this way that if they live in open spaces with clear skies or have access to common observation facilities such as cameras and telescopes, they should go to a high and suitable place near sunset and try to see the crescent on the horizon, and if it is hard for them to do so, they should refer to reputable internet websites which publish news and documents on the sighting of the crescent without political or religious considerations and only by relying on astronomical studies, and compare their reports with each other, until they are convinced of the sighting of the crescent somewhere in the world.

We hope that laziness, passivity and imitation will disappear from Muslims and give room to vitality, effort and research, because the Islamic Ummah -more than ever- needs such transformation and reform, in order to get ready for the advent of Imam Mahdi peace be upon him.

↑[1] . For awareness of his guidance on the sighting of the crescent, see Question and Answer 64 and 150, and for awareness of his warnings about imitating scholars, see the book "Return to Islam" (p. 57) and its explanation.
↑[2] . For example, see: Question and Answer 160.
Other articles and remarks written by this author:
1 . Article “The insult of the West to the messenger of God peace and blessings of God be upon him and his household; Factors and solutions”
Previous article Next article
Share
Share this content with your friends.
Email
Telegram
Facebook
Twitter
You can also read this content in the following languages:
فارسی العربية Точикӣ
If you are familiar with another language, you can translate this content to that language. [Translation form ]
×
Writing an article or remark
The use and application of contents of the website are allowed only with explicit mention of the source.
×
×